Excavations have ceased for this project. For more information, contact John Gorczyk jmg433@cornell.edu.

This project began in 2012 as part of a larger survey effort to identify Late Bronze Age (LBA) and Early Iron Age (EIA) sites in the southwestern part of modern-day Bulgaria. The project is a collaborative effort between the University of Heidelberg and New Bulgarian University (NBU). Cornell University has been involved since 2013 on a research grant from the American Research Center in Sofia. Dr. Nerissa Russell, Department of Anthropology, Cornell University serves as the project’s American co-PI. Dr. Bogdan Athanassov, NBU is the Bulgarian co-PI. Senior research members on the project include John Gorczyk, Cornell University and Philipp Stockhammer, Heidelberg.

The larger goal of the project is to understand the transition from the LBA to EIA in the Mesta Valley where the site of Bresto is located. Previous work has shown that changes to settlement patterns were driven in part by increased communication with Aegean polities through major river valleys like the Struma. Large stone structures were built on prominent places in the landscape, positioned to provide the greatest vision of the surroundings or to control movement through river corridors and mountain passes. Among the many artifacts recovered from these structures were Mycenean ceramics, indicating a connection with the LBA polities further south. The most well studied of these, Kaimenska Chuka, was excavated by Mark Stefanovich and his team in the 1990s.

By the end of the LBA these sites were abandoned and settlements begin to arise in valleys that are not directly connected with the northern Aegean. Little is known about this “transition”, which makes sites like Bresto potential sources of invaluable information regarding the social, economic, and cultural character of this change. Bresto is located in the foothills of Pirin Mountain, in a natural corridor through the mountains through which the Mesta River flows. Therefore it sits at the intersection of two very important routes: one north-south which leads into the northern Aegean and the other east west, which leads into the Upper Maritsa Valley of Thrace.

Bresto was identified in 2012 by surface survey and explored minimally with a few test trenches. Large amounts of EIA pottery were uncovered along with the remains of a large fortification wall. In subsequent excavations we were able to identify 3 possible habitation phases. The majority of the remains are from the EIA (11th-8th c BC), including at least one destroyed house. An earlier stone wall, stratigraphically positioned below the larger wall indicates the presence of a previous settlement (LBA or very early EIA). This earlier settlement was destroyed prior to the construction of the EIA fortification wall. A small number of intrusive pits from the LIA are also present, as well as a possible LIA house floor.

As the title of the project suggests, we are interested in the roles played by animals in this transition. We are especially interested in looking for evidence of specialized stock breeding and investigating the social organization of production for this community. We are using a combination of traditional zooarchaeological methods and stable isotope analysis to answer questions of animal diet and mobility. We are also looking at what contribution hunting made to society at this time. 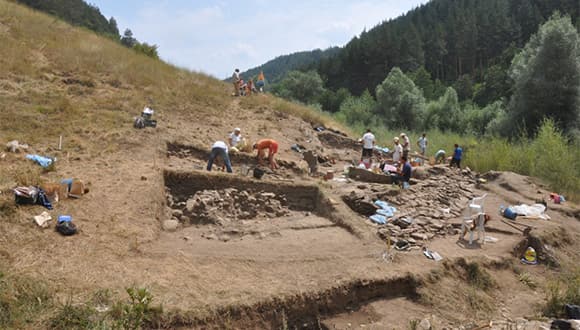