Tell Abil el-Qameh, identified with the biblical town Abel Beth Maacah, is a 100-dunam site, located 4.5 miles west of Tel Dan and 1.2 miles south of Metulla on Israel's northern border with Lebanon. The site controls the roads leading north to the Lebanese Beq‘a, west Lebanese/ Phoenician coast (21 miles to Tyre), and northeast to inner and northern Syria (43 miles to Damascus). The tell is composed of a large lower mound in the south and a smaller lofty upper mound in the north.  It is mentioned in the Bible three times, in relation to the time of King David in the 10th century BCE (2 Samuel 20: 14ff), in relation to the Aramean conquest by Ben Hadad in the 9th century BCE (1 Kings 15:20) and in relation to the Neo-Assyrian conquest by Tiglath-Pilesar III in the 8th century BCE (2 Kings 15:29). In addition to these references to the city of Abel Beth Maacah, the bible refers to an entity/kingdom called “Maacah” (Joshua 13:11; 2 Samuel 10:6; 1 Chronicles 19:6) whose identity and relationship to Abel Beth Maacah remain enigmatic.

Despite its geographic and historical prominence, the site has never been excavated until now. Limited surveys were conducted Prof. William G. Dever of the University of Arizona, as well as Yehudah Dayan, Yosef Stefansky and Edan Shaked of the Israel Antiquities Authority. Pottery from the Early Bronze Age  II-III (third millennium BCE) until the Ottoman period was found. The small Arab village of Abil el-Qameh occupied about one-third of the mound until 1948, its ruins visible on the surface today.

In May 2012, members of the present excavation team conducted a survey in order to build on the knowledge of the occupation sequence of the site and to select areas for full excavation. The pottery collected confirmed the occupation profile of previous surveys, revealing sherds from the Early Bronze II-III, Middle Bronze II, Late Bronze, Iron Age I, Iron Age II, Persian, Hellenistic, Medieval and Ottoman periods. The survey revealed that early remains may be found directly under topsoil in the lower city, while they are partly covered by remains of the village in part of the upper city.

Four seasons of excavation, four weeks each, have been conducted from 2013-2106, with the participation of volunteers from the United States, Canada, Europe and Israel. Five excavation areas have been opened, three in the lower mound (Areas F, O and K), one in the saddle between the lower and upper mound (Area A), and one on the eastern side of the upper mound in the north (Area B).  In the lower mound, the earliest architectural remains date to the Middle Bronze IIB, with substantial remains from the Late Bronze Age and Iron Age I. Following the latter period, it seems that the lower mound was abandoned and occupation took pace only on the upper mound in the north, where remains of the Persian-early Hellenistic period, Iron Age II and I, and Middle Bronze IIB have been revealed.

The excavations to date have shed light on various important research questions, such as the relationship of this region to the Arameans in the Iron Age I and II, the interaction of Middle Bronze Age IIB city-states in the upper Hula Valley, the nature of transition from the Late Bronze Age to the Iron Age I in the shadow of the destruction of Hazor. 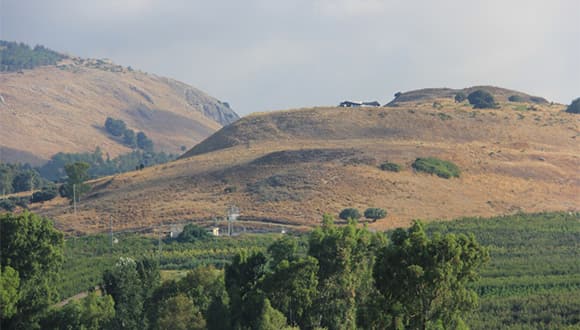